Truly the Best and Easiest Mac n Cheese Recipe on the Planet. It’s A Little Crazy! 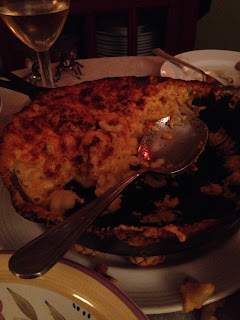 OK. As I have said before there is almost nothing I love more than a great Mac N Cheese. I mean I am a little obsessed. I admit it. And there are as many Mac N Cheese recipes out there as there are wannabe rock stars and movie stars in New York and Hollywood combined. I have been all over the country and I can tell you that there are a lot of recipes and good ones at that out there. But replicating that really good restaurant chef quality experience at home, that’s the trick. It’s a lot of work right?

I mean doesn’t that look good? My viewpoint is I want Mac and I don’t want to have to wait for it. But what to do if you don’t have time and you don’t want to use the “Box”?

My family was never a big Mac n Cheese family. I learned to love it from going to my relatives. My Aunt Lucille made what I thought was the best Mac n Cheese is the world. She would make it for big family gatherings at her house. It was a classic old school southern baked version with plenty of cheese a creamy sauce and lots of eggs. My Aunt Martha made one I believe and also my Aunt Doris. But my Mother and Grandmother were never big on it. When we had it I think it mostly came out of a box and was just a snack for lunch or something. In retrospect that was odd given they made a lot of noodle dishes but that was really never one of them.

However, I think my real love for Mac n Cheese began in college. The Dining hall at James Madison University or D-Hall as we referred to it put out some really incredible food. One of the dishes that made it’s way often into the steam table on the buffet was a Mac N Cheese like none I had ever had. So creamy and yet so substantial I fell in love with it. And I indulged in it as often as they would have it on the menu board. Usually served on Fridays when they also served fried fish it was a staple of my roommate’s and mine freshman year.

Since then moving back to Charleston, one would see Mac N Cheese everywhere. I mean it’s the South, we consider it a vegetable! However, it was not until I moved to New York City that the dish became somewhat of a culinary show piece in the dining scene. Comfort food became a “thing” here in New York in the late 1990’s. It was a genre of food that while plebeian in it’s truest form, somehow captured the culinary imagination of New Yorkers. You know it created that feeling of “Oh look I’m eating a little bit of the small town homey goodness and look, this country style simplicity has come to the big city and makes me feel better! Yay!”. In other words it was a fad. Well fads come and go but the restaurant Mac N Cheese NYC love affair has endured.

So as I have looked for a home version I have always thought it must be one that can be served right away and fresh. I mean if you are gong to serve Mac n Cheese make it the meal and serve it with a salad and be done. I mean…Yum!

The other thing about a home version I think is that it should be easy. So many have you make a white sauce. fold in cheese, boil pasta on and on and on. Now I have a version on the blog for stove top Mac N Cheese. It uses one pot and is very easy. But it is not the Mac n Cheese of my dreams, all crusted with cheese hot from the oven browned and bubbling. It’s awesome, but I wanted more.

So this is how I came up with this recipe. One day I was looking around for a recipe for zucchini casserole and came across my cousin’s squash casserole recipe that used cottage cheese and milk and eggs to basically make a custard.

Then I remembered a recipe I had read in the New York Times that had talked about using Cottage Cheese as a binder in Mac N Cheese. In the article they also talked about not having to boil the pasta. Well that made sense given I know now that you don’t have to boil Lasagna Noodles. They cook right in the sauce. So this became interesting.

The one pot Mac n Cheese used milk to cook the pasta in and make it creamy. What if you did that in the oven. Well I tried it and it worked. I mean it really worked.

So give it a try and enjoy, Ya’ll

In a blender mix the first 6 ingredients till smooth

In a large bowl mix 1/2 of the Cheddar cheese

Cover with foil and bake for 30 mins

Uncover, top with remaining cheeses and bake another thirty minutes till bubbling!

Let sit for 10 minutes and then enjoy Ya’ll!

Taste and Tales of an Underground Restaurant Chef

2 responses on “Truly the Best and Easiest Mac n Cheese Recipe on the Planet. It’s A Little Crazy!”