Have you ever known somebody who was really critical of other people? No matter what good there was to be celebrated or enjoyed, they zero in on the negative and give it all their focus. Maybe you’ve been that person. I know during certain times in my life (or when I’m around certain people), I’ve definitely let my critical streak run rampant.

It’s a vicious cycle if you think about it. We start out feeling bad about something in our life…maybe we feel less than or lacking in some area. So we criticize someone else as a way to make ourselves feel better. But doesn’t it always leave us feeling worse? I know it does for me.

Recently, I had dinner with a group of blogger friends and it made me sad to hear some of the stories they shared about scathing criticism they’ve received from readers, co-workers, etc. about things they had written on their blogs (or the fact they had a blog at all).

Did you know there are online forums where anonymous haters can make snarky comments and other criticisms about blogs they love to hate? I’m embarrassed to say I’ve visited them in the past for pure entertainment value. But why is tearing each other down entertaining?

Even though I never posted anything, my reading those sites is basically the same as me sitting quietly while someone tears down another person with his words. I wouldn’t stand idly by while someone bad-mouthed my best friend…yet it feels so much harder to do anything about anonymous internet trolls.

But again, I think it goes back to the cycle of feeling badly –> saying mean things in an attempt to make someone else feel badly –> and then feeling badly about yourself again.

When you’re stuck on that roller coaster, it’s hard to get off.

[bctt tweet=”When all your energy goes to tearing someone down, there’s no time to spend lifting yourself up.” username=”thesouthernc”]

So what’s the remedy for being less critical? Create something. Anything. Just create.

I know it seems simple and that’s because it is. Whether it’s a delicious meal for your family or a little doodle on your desk calendar. An epic poem or a batch of homemade laundry soap. Just make something of your own.

Creativity displaces criticism because it opens up a world of possibilities where you feel like you can make things happen. And in that world, you are free to explore your own talents and gifts instead of picking apart the gifts and talents of others.

[bctt tweet=”Being critical of another’s creation takes about one tenth the effort of creating something yourself.” via=”no”]

Besides, being critical of what someone else created takes about one tenth of the effort of actually creating something yourself. It’s easy to stand back (in the shadows of the Internet, no less) and throw barbs at others. What’s hard is getting up each day and pushing yourself to create something of your own.

I’m a big fan of author Steven Pressfield (“The War of Art”) and I’d be willing to bet that criticizing others is a form of the resistance he’s so keen to point out. When all your energy is going toward tearing someone else down, there’s little time to spend lifting yourself (or somebody else) up. 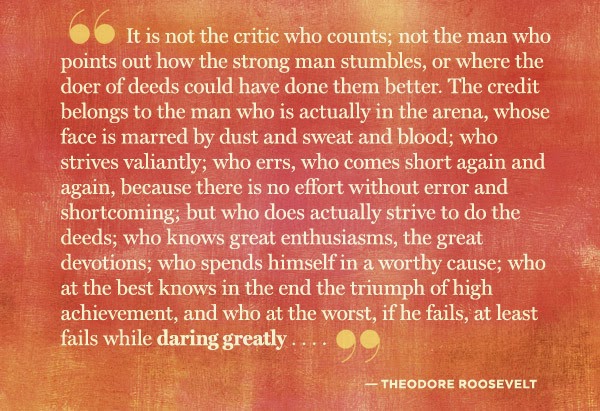 I would rather fail a hundred times trying to do something my heart was fully committed to than sit back and do nothing, while snarking about the shortcomings of others. Wouldn’t you? 2 responses on “Choosing Creativity Over Criticism”